Last Friday we released version 0.11.0 of our Open Source API Management System wicked.haufe.io (GitHub Repository, Release Notes). Over the course of the last couple of weeks our focus has been to make deployments to production easier and how to enable deployments to alternative runtimes (other than using docker-compose), or at least how to make them easier.

This blog post will explain some of the changes and enhancements that were made and how you can update your existing API Configurations to benefit from them.

To set the scene a little, let’s recap how the deployment architecture of a typical wicked deployment looks like: 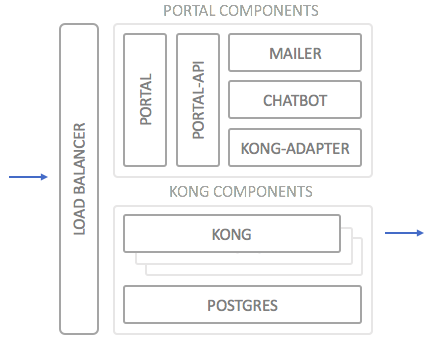 The two main blocks are the portal components and the Kong components (the actual API Gateway). Both blocks are made up of further smaller containers which fulfill specific tasks, such as the “mailer” or the “portal”. The Kong components consist of n Kong Gateways (depending on your scalability needs) and a Postgres database in which Kong stores its configuration.

In front of both blocks resides the load balancer. This can be any load balancer capable of doing SSL termination and resolving VHOSTs (i.e. almost any LB). The default implementation is leveraging docker-haproxy for this purpose, but using an Apache LB, nginx proxy, or even an ELB or Azure LB is equally possible (albeit not preconfigured).

The API Portal needs to keep its configuration somewhere, and also needs to keep some data persistent. The configuration data is static and is usually retrieved from a source code repository (preferably git). This means this data does not need to be persisted, as it can be recreated from scratch/from code any time (“STATIC CONFIG”). Data which comes from the usage of the API Portal (users, applications, subscriptions and such) does need to be persisted in some way (“PERSISTENT DATA”): 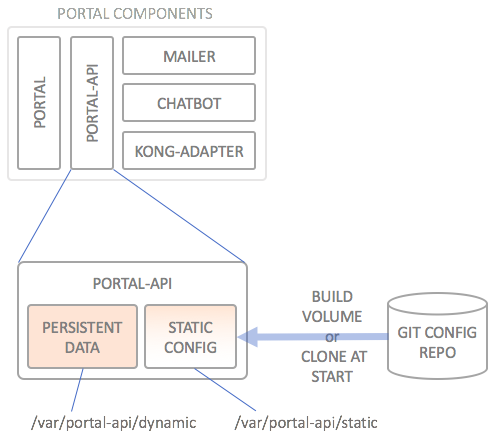 How persistent storage is kept varies from orchestration to orchestration, but this is usually not a big issue; it’s different, but as long as the runtime is able to mount a persistent volume at /var/portal-api/dynamic which remains the same over the entire lifecycle of the portal-api service container, all is fine.

With regards to the static configuration which usually resides in the /var/portal-api/static folder, the default deployment using docker-compose has always assumed that your are able to build a private image using docker build on the docker host/swarm you are deploying to. This is quite an issue with e.g. Kubernetes or Mesosphere which always assume that images are downloaded (“pulled”) to the system, and not built on the cluster.

The first workaround you can apply to circumvent this is to build a private image derived from haufelexware/wicked.portal-api which prepopulates the /var/portal-api/static directory with your API Configuration and push that to a private repository, from where the orchestration runtime (e.g. Kubernetes or Mesos) pulls it when deploying. This has a couple of obvious drawbacks, such as needing a private docker repository, or that you need to build a new docker image each time you want to deploy a new API configuration.

In order to make the use case of updating the API configuration easier, we enhanced the startup script of the portal-api container to be able to by itself clone a git repository into the /var/portal-api/static folder. By specifying the following environment variables for the portal API container, this will be done at each container creation and restart:

This enables running the “vanilla” portal API image also in environments which do not support building docker images on the docker host, such as Kubernetes.

This is how the core wicked containers behave now: 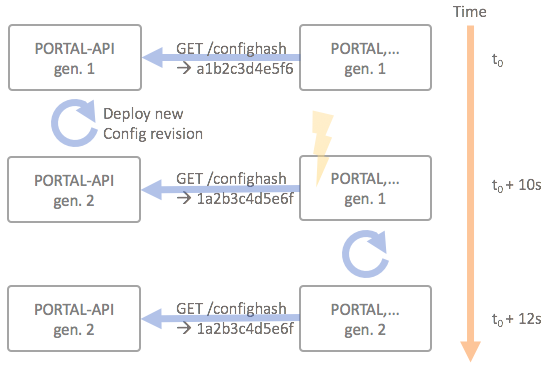 The diagram above depicts how the portal API interacts with e.g. the portal container (Kong adapter, mailer and chatbot also behave exactly the same):

This means that all wicked containers can be treated as individually deployable units, which makes your life a lot easier e.g. when working with Kubernetes.

The polling functionality is built in to the wicked Node SDK, which means that any plugin or authorization server built on top of this SDK also automatically benefits from the automatic config hash checking; example implementations of authorization servers are wicked.auth-passport (for social logins like Twitter, Facebook, Google+ and GitHub) and wicked.auth-saml (for SAML identity providers).

In case you are running wicked in a version prior to 0.11.0, you do not necessarily have to update any of your deployment pipelines or docker-compose.yml files. The git clone method does though make updating the API configuration a lot simpler, so we recommend you to change your docker-compose.yml in the following way:

You can find more and more detailed information in the documentation.

Oh, and one more thing

We also implemented the promised support for the OAuth 2.0 Authorization Code Grant since the last blog post (actually in 0.10.1). Just for the sake of completeness.

If you have any questions or suggestions regarding wicked, please file an issue on GitHub. Hearing what you think and what kinds of scenarios you are trying to implement using wicked is super exciting!