Continuing our API journey, we’re currently designing an API for one of our most valuable assets: Our content, such as law texts and commentaries. Let’s call this project the “Content Hub”. The API will eventually consist of different sub-APIs: content search, retrieval and ingestion (“upload”). This blog post will shed some light on how we will support bulk ingestion (uploading) of documents into our content hub using Azure out of the box technology: Azure Storage SAS - Shared Access Signatures.

In order to create new content, our API needs a means to upload content into the Content Hub, both single documents and bulk ZIP files, which for example correspond to updated products (blocks of content). Ingesting single documents via an API is less a problem (and not covered in this blog post), but supporting large size ZIP files (up to 2 GB and even larger) is a different story, for various reasons:

Our first architectural solution approach was to set up an (s)ftp server for use with the bulk ingestion API. From a high level perspective, this looks like a valid solution: We make use of existing technology which is known to work well. When detailing the solution, we found a series of caveats which made us look a little further:

Knowing we will most probably host our content hub on the Microsoft Azure cloud, looks immediately went to services offered via Azure, and in our case we we took a closer look at Azure Storage. The immediate benefits of having such a storage as a SaaS offering are striking:

Remains the question of securing the access to the storage, which was one of the main reasons why an ftp server seemed like a less than optimal idea.

Accessing an Azure Storage usually involves passing a storage identifier and an access key (the application secret), which in turn grants full access to the storage. Having an API client have access to these secrets is obviously a security risk, and as such not advisable. Similarly to the ftp server approach, it would in principle be possible to create multiple users/roles which have limited access to the storage, but this is also an additional administrational effort, and/or an extra implementation effort to make it automatic.

Luckily, Azure already provides a means of anonymous and restricted access to storages using a technique which is know e.g. from JWT tokens: Signed access tokens with a limited time span, a.k.a. “Shared Access Signatures” (“SAS”). These SAS tokens actually match our requirements:

We leverage the SAS feature to explicitly grant write access to one single blob (file) on the storage for which we define the file name. The access is granted for 60 minutes (one hour), which is enough to transfer large scale files. Our Content API exposes an end point which returns an URL containing the SAS token which can immediately be used to do a PUT to the storage. 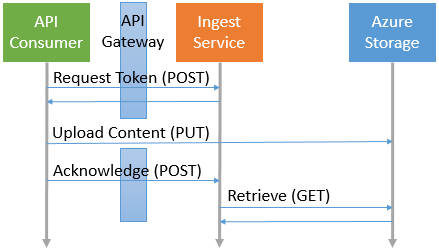 The upload to the storage can either be done using any http library (using a PUT), or using an Azure Storage SDK (available for multiple languages, it’s on github), which in turn enables features like parallel uploading or block uploading (for more robust uploading).

How does this look in code?

The best part of all this is that it’s not only simple in theory to use the Storage API, it’s actually simple in practice, too. When I tried to do this, I chose node.js to implement a service which issues SAS tokens. Azure Storage has an npm package for that: azure-storage, which can be installed just like any other npm package using npm install azure-storage [--save].

To get things up and running fast, I created a simple Express application and replaced a couple of lines. The actual code for issuing a token is just the following:

So, what does this do?

For more information on how to actually try this out, see the link to a github sample below.

Can I haz the codez?

My sample project can be found on github: