Technical documentation, if done at all, often tends to get outdated very quickly. One of the reasons for that often lies in having the documentation located somewhere far away from the subject it is documenting: the code.

The guys who are supposed to write the documentation face a media break when going to document what they were doing: They need to update a document which is not co-located to the code they were writing and perhaps even is not available in their IDE (e.g., a wiki or a word document somewhere in Sharepoint).

Even if that burden is taken and the documentation gets updated, it may contain duplicated content when it comes to code examples.

Having code examples in the documentation quickly violates the single source of truth. If the corresponding code changes, how am I sure that the documentation does not get outdated or even misleading at worst?

This Blog Post describes how we try to tackle this using Documentation as Code based on AsciiDoc.

AsciiDoc is a lightweight markup language, which is meant for writing technical documentation, articles or even presentations, books or prose. It started as an alternative to DocBook, which is XML based and thus brings much more markup overhead.

While being lightweight, it is expressive enough for writing the mentioned types of documents. That distinguishes AsciiDoc from other lightweight markup languages like e.g. Markdown (see e.g. Don’t use markdown for technical docs, AsciiDoc vs. Markdown).

Here are some of the things you can easily express in AsciiDoc:

There are source highlighters available for multiple languages. Here is an example for XML. The source also contains a so called callout, which is used to mark a specific position in the code, that can be referenced below the code block for further explanation:

It is also very easy to emphasize different sections, e.g. for prominently placing a hint, a warning or an excursion:

This gets rendered to:

Tables can be easily created in various ways. One way is to use inline CSV format like this

which gets rendered to

AsciiDoc could also render that table directly from a CSV file from disk. That can be useful if you, for instance, want to include content of dynamically created CSV files (e.g. some kind of report done within the build) into your documentation.

This ends up in:

It can also render diagrams, which are written in Ascii using the asciidoctor-diagram extension. 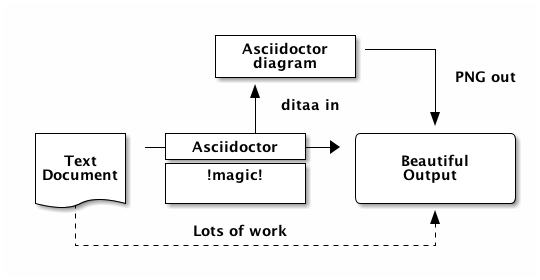 That allows for maintaining diagrams without the need for any additional UML tool. And, besides, you could use variables inside your diagrams, which get substituted during the build and thus are updated automatically.

The best documentation might be the one you don’t need to write yourself and which gets updated automatically.

You can have both, when the documentation gets generated from sources which you maintain anyway. One example for that is when you have an API using the OpenAPI Specification (fka. Swagger).

Using Swagger2Markup, a human readable documentation can be generated right from your specification. 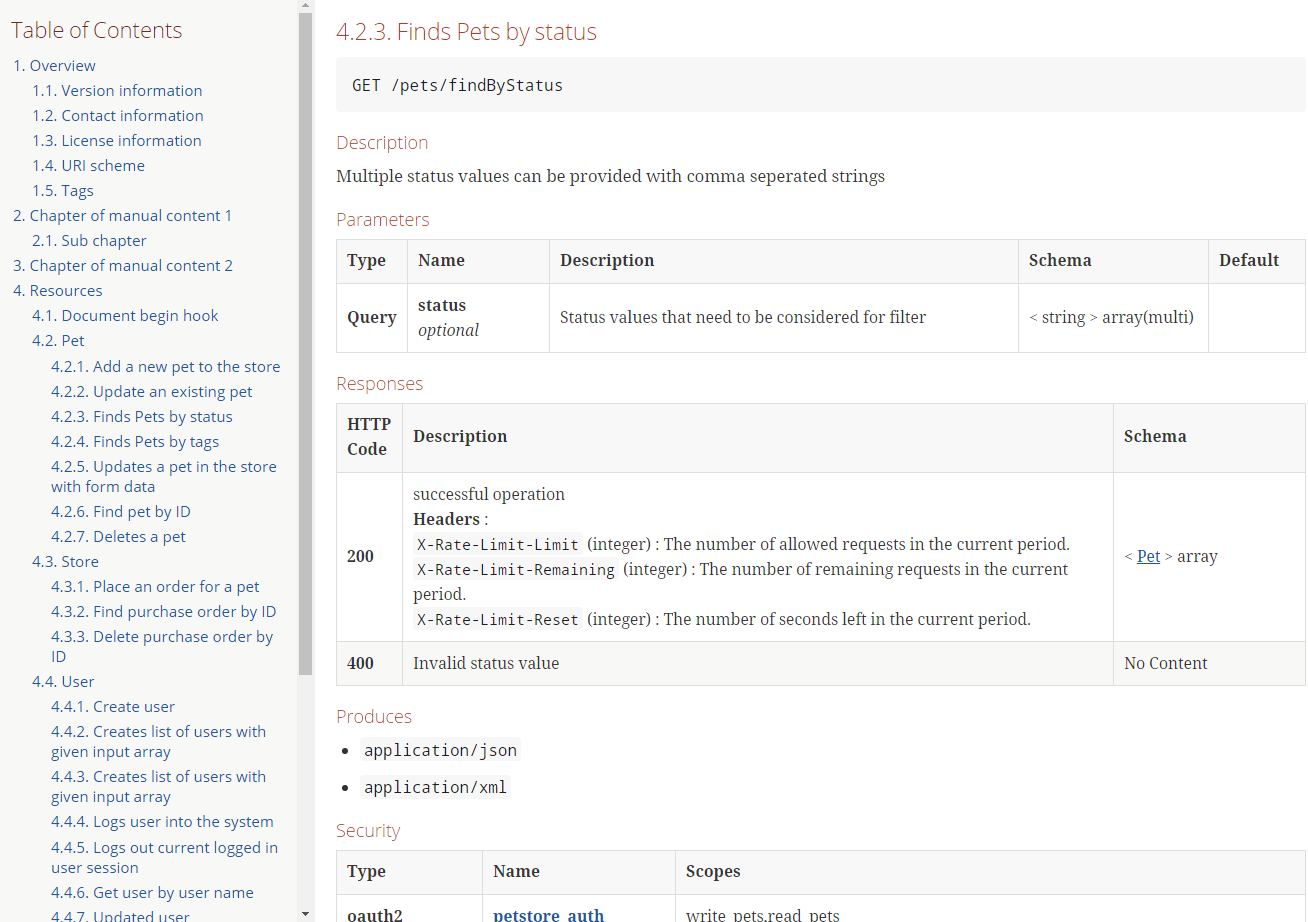 The shown examples cover only a small set of the features offered by AsciiDoc. Besides, there are things like:

Starting with the documentation’s title, a Table of Contents with three levels on the left side, having the title “Table of Contents” is configured. Below that, we configure sections to be numbered up to five levels. Defining the imagesdir allows us to include images across the documentation relative to that path. Setting the icons attribute to font tells AsciiDoc to use Font Awesome icons instead of Unicode glyphs, which normally looks better. And, finally, by specifying a source-highlighter, source highlighting for our code blocks gets enabled.

Following the configuration, we can start either adding content to the page or including other pages / chapters, using the include directive:

Sources written in AsciiDoc can be converted in multiple output formats. A widespread toolset for working with AsciiDoc is AsciiDoctor. It can be used standalone or as plugins for Maven or Gradle.

AsciiDoctor also provides good reference on how AsciiDoc can be used. The Quick Reference covers the most common cases. If you want to dive deeper, there is also a Full Guide available.

Keeping documentation together with your sources

Do you remember two of the difficulties of writing documentation? The documentation lives far away from what it is documenting and it tends to contain duplicated information, which outdates very quickly.

For both cases, AsciiDoc offers a solution. The documentation sources can reside right in the code repository. So the developers can just open and edit them directly within their IDE. In addition, some parts of the documentation, e.g. code samples, don’t need to be duplicated but can just included into your documentation.

In AsciiDoc you can include source files from the repository like this:

That class will be rendered inline within the documentation, having proper source highlighting.

The section between the comments can be included by specifying the corresponding tag:

By that, the documentation gets updated automatically when you update your sources, without having any code duplication.

Release documentation together with code

A further benefit of having your documentation alongside you sources is that you can release them together. By that we get proper versioned documentation for free. Imagine you need to maintain an older version of your application and only have the latest documentation at hand.
Having the documentation within your repository allows to browse the documentation, which fits exactly to the code version you are dealing with. 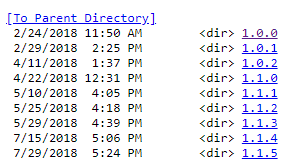 Integrate AsciiDoctor in your build using Maven or Gradle

When having the documentation sources alongside your code, you would like to process those sources (e.g. converting them to HTML or PDF) the same way you process your code. For that, there are integrations for both, Maven and Gradle, available.

Ths post will concentrate on the integration via Maven using the asciidoctor-maven-plugin. The easiest integration, using default parameters, looks like this:

By default, it will pick up resources in ${basedir}/src/main/asciidoc and converts them into HTML.

Normally, we use a distinct Maven profile for running AsciiDoc. By that we can easily decide whether to run AsciiDoc. You may want to skip it in order not to affect build time. Following example shows two executions, which convert the sources into HTML and PDF, using the corresponding backends. For converting into PDF, asciidoctorj-pdf is used, which is defined as a plugin dependency.

Having that in place, you can build your documentation by invoking this profile:

Having documentation near the code to make writing documentation easier is one thing. Another thing is to find documentation, when we need it. Since we have the documentation sources near to what it documents, it is easily to be found by developers. Due to its lean syntax even the sources are quite good to read for developers. Besides, there are plugins for all common IDEs, which render AsciiDoc. And even GitHub and GitLab render AsciiDoc directly in their graphical user interfaces. Both also recognize a README.adoc instead of a README.md and render its content as a repository’s description.

Here you can profit in two ways. First is you get a better expressiveness when using AsciiDoc (see e.g. the description of the asciidoctor-maven-plugin at Github). Second is you can “reuse” the README.adoc in the documentation you are going to convert to HTML or PDF by just including it as shown above.

In order to manually convert .adoc files into HTML or PDF, without using maven or gradle, you can install the needed tools locally. The easiest way is to use RubyGems:

There are also alternative ways to install the tool chain.

After having asciidoctor in place, you can convert any .adoc using.

That converts the document to HTML by default. You can specify a different output format by specifying a corresponding backend.

There are multiple extensions for further output formats available. E.g. for PDF, EPUB3, LaTeX or Mallard.

Please refer to this page for a more detailed documentation.

To convert you documents into PDF, you first need to install the asciidoctor-pdf extension. Again, using RubyGems is the easiest:

In order to get proper syntax highlighting for source code samples, you have in your files, you need to install a highlighter. Rouge currently is the recommended one.

Afterwards, you can convert your document by just calling

Please refer to that document for a more detailed documentation.

No matter how good the tooling, having good documentation still requires continuous effort and discipline. Just like the code itself: when it does not get maintained continuously it will start to rot.

AsciiDoc offers a nice way to keep documentation together with your code and by that lowers the burden for developers to create documentation and to prevent ending up having lots of duplicated and outdated documentation.

AsciiDoc has much less markup overhead compared to DocBook. On the other hand is offers much more expressiveness as, for instance, Markdown. It is widely supported and is about to get an open specification within the Eclipse Foundation.