Demystifying the Language of German Reference Letters with NLP - Part 1

It’s a legal obligation in Germany for all companies to provide reference letters for everyone leaving the company. A reference letter is essentially an evaluation, a final certificate, which an employee gets before leaving a company or changing supervisors and serves as a qualification for the next employer by proving two things: did this person really work for the company in the past, and, how good from the company’s perspective did she or he perform.

Now, the last part is tricky. German law and common practice limit the degree of criticality allowed in reference letters. Loosely speaking, expressing sentiment in reference letters may only vary from good to exceptionally excellent. So, in terms of school grades:

Here are the variations of the same sentence based on its (German) grade:

1.0 - He was always able to find excellent solutions for all problems.

2.0 - Even for difficult problems, he is already able to come up with good solutions after a short period and always achieves good results.

3.0 - Even for difficult problems, he is already able to come up with good solutions during the preparation of his bachelor thesis and always achieves satisfactory results.

4.0 - Even for difficult problems, he is already able to come up with satisfactory solutions during the preparation of his bachelor thesis and always achieves satisfactory results.

People, who write German letters of reference in Germany, must master a special domain language to say what they really mean about employee performance. One way to be faster about writing these letters is to have a repository of reuse sentences. But, even with a large amount of pre-defined sentences onboard, we will never be able to satisfy all possible specific needs and formulations our customers might require.

So, if a suitable boilerplate sentence isn’t found, authors must write it on their own. The problem occurs when the new sentence is not precisely formulated in accordance with the examples given above, it might change the overall grade of the reference letter.

Let’s say our author/manager aims to keep a high overall grade for a reference. To do this, she wants to emphasize one more valuable skill in the letter in addition to all the standard texts. If this sentence is not formulated correctly, this change might have the unintended effect of downgrading the whole text. Until now, we were not able evaluate new sentences without human intervention. But with Machine Learning, it becomes possible.

Machine Learning to predict how good, bad, or ugly a text really is

Thinking about the data we could use for training future ML models, we realized that we had data in the form of pre-defined sentences with assigned grades, which had been created by our Editorial Department.

For the first experiment, we decided to try to detect if a new sentence has a positive or negative connotation, without assigning any certain grade to it. So, an outcome for a given sentence should be ↗️ or ↘️.

Before starting with a model, we needed to clean the data. After separating English and German sentences, removing general sentences with no grades assigned, dropping duplicates and empty values, we had ~4700 sentences to play with.

After further analysis, the number boils down to 1100+ unique sentences. The reason is that every sentence is written using two genders and two tenses. Although it clearly limits our corpus, we don’t filter these grammar variations. In the end, it should increase prediction accuracy and eliminate gender biases.

We did several things here to make the data more suitable for machine processing:

As it was explained earlier, we have 4 different grades for each sentence. Let’s assume that grades in the range from 1 to 2 are positive, and grades from 3 to 4 are negative. The whole dataset is split in two halves.

To enable machine to comprehend natural language we need to convert our text to numbers. There are numerous algorithms to do it. For now, we stuck to the basic one called CountVectorizer from the SciKit package. This “converts a collection of text documents to a matrix of token counts” (https://scikit-learn.org/stable/modules/generated/sklearn.feature_extraction.text.CountVectorizer.html).

To keep things simple, we use LogisticRegression from SciKit linear models. This approach sets a threshold between two categories (positive and negative in our case) and assigns new data based on its commonalities with a training data to either of these two categories. The Logistic Regression function is represented in the image below: 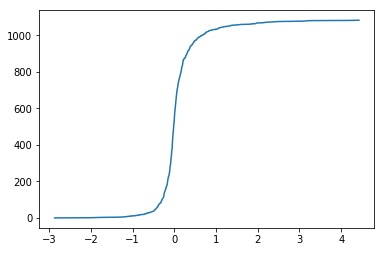 Below is the example of two, analyzed sentences. Our function basically takes a sentence sentiment score and assigns the text to the negative or positive category. If the value is positive, the sentiment is positive as well, and vice versa.

We got a model, which identifies a sentiment of a new, unseen sentence, written with respect to the reference letter language.

The results are promising, and we continue to work on this use case further by improving the model and by applying other approaches and algorithms. If it’s good enough, maybe we can deliver it as a feature to our customers that facilitates reference editing and creation of new templates.

This is only the beginning, so buckle up and stay with us to follow our natural language processing / machine learning endeavor.