Redux, according to the offical docs, is a predictable state container for JavaScript apps written by Dan Abramov. It’s a lightweight implementation of Flux, which is another library for managing the state. Basically Redux took the ideas that Flux brought in, leaving out its complexity by “borrowing” things from Elm.

For starters, there are several key concepts to understand: store, actions / action creators, and reducers. The official documentation is pretty straightforward and also plenty of examples and nice analogies can be found on the internet.

Tip: As a best practice, even though it’s possible to have a single reducer that manages the transformation done by every action, it is better to use reducer composition - breaking down the reducer into multiple, smaller reducers, each of them handling a specific slice of the application state.

After each smaller reducer produces its corresponding next state, an updated state object will be saved in the store. Because this is important, I’m mentioning again that the store is the single source of truth in our application. Therefore, when each action is run through the reducers, a new state is produced and saved in the store.

Besides all of this, Redux comes up with another concept, action creators, which are functions that return actions. These can be linked to React components and when interacting with your application, the action creators are invoked (for example in one of the lifecycle methods) and create new actions that get dispatched to the store.

Fetching data from an API

Now onto our application. All of the above code snippets were just examples. We will now dive into the important bits of the code of our app. Also, a github repo will be available at the end of the article, containing the entire app.

Our app will fetch (asynchronously) data that is retrieved by an API - assuming we already built and deployed a working API, how convenient :) - and then display the fetched data as nice as my UI design skills go (not too far).

TVmaze’s public API contains tonnes of data and we will fetch all the shows they have ever aired. Then, the app will display all the shows, toghether with their rating and premiere date.

In order for this application to work properly, our state needs to have 3 properties: isLoading, hasError and items. So we will have one action creator for each property and an extra action creator where we will fetch the data and call the other 3 action creators based on the status of our request to the API.

Let’s have a look at the first 3 action creators:

The first 2 action creators will receive a bool as a parameter and they will return an object with that bool value and the corresponding type.

The last one will be called after the fetching was successful and will receive the fetched items as an parameter. This action creator will return an object with a property called items that will receive as value the array of items which were passed as an argument. Instead if items: items, we can just write items, using an ES6 syntactic sugar called property shorthand.

To visualize a bit what was described earlier, this is how it looks in Redux DevTools: 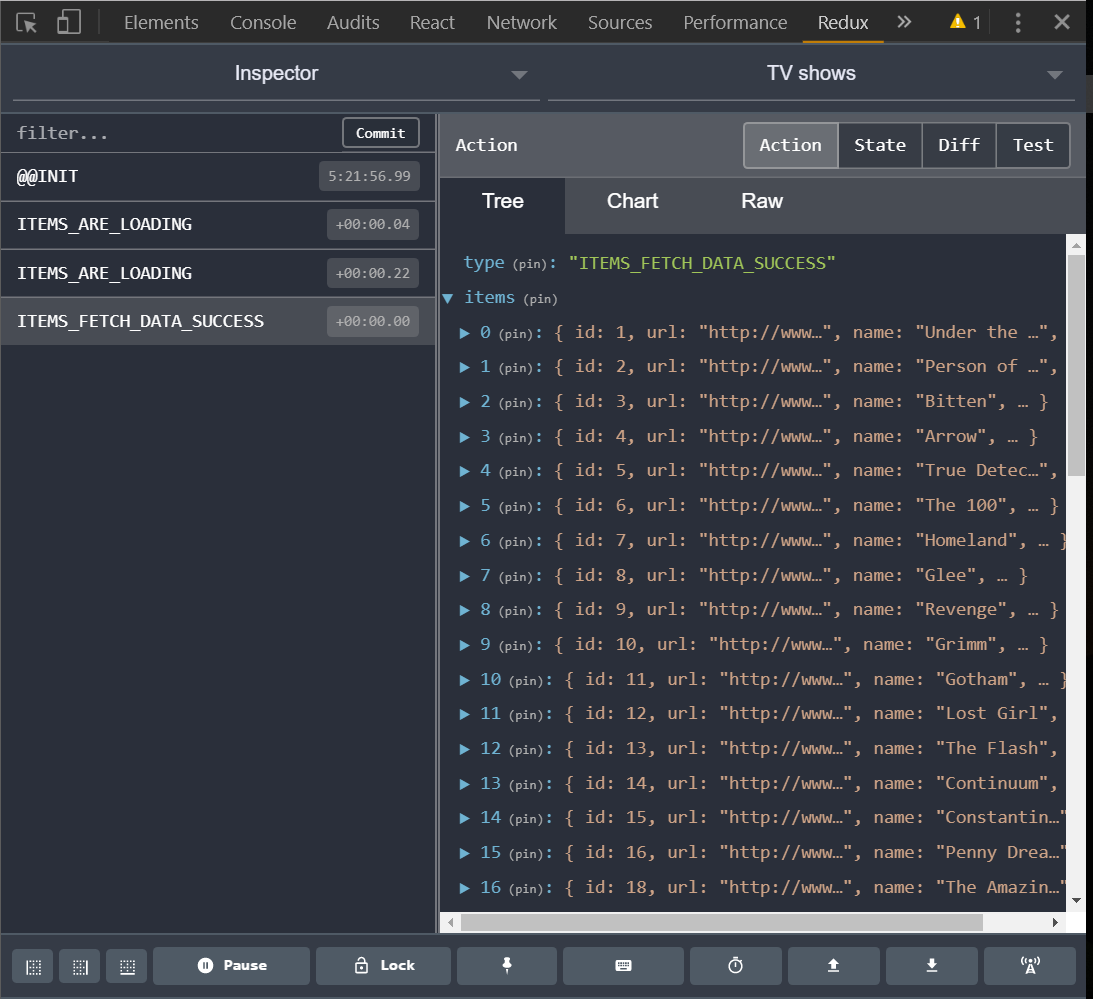 Out of the box, action creators can return just actions. That’s where Redux Thunk comes in handy. Thunk allows us to have action creators that return a function instead of an action and dispatch an action only in certain cases.

If it wasn’t for Redux Thunk, we would probably end up having just one action creator, something like this:

Obviously, it would be a lot harder in this scenario to know if the items are still loading or checking if we have an error.

Knowing these and using Redux Thunk, our action creator will be:

Now that we have our action creators in place, let’s start writing our reducers.

Each reducer takes 2 parameters: the (soon to be previous) slice of state and an action object:

Now that we have the reducers created, let’s combine them in our index.js from our reducers folder:

Don’t forget about including the Redux Thunk middleware in the configureStore.js:

Using the store in our root index.js

Writing our React component which shows the fetched data

Let’s start by talking about what we are importing here.

In order to work with Redux, we have to import connect from ‘react-redux’:

Also, because we will fetch the data in this component, we will import our action creator that fetches data:

We are importing only this action creator, because this one also dispatches the other actions to the store.

Next step would be to map the state to the components’ props. For this, we will write a function that receives state and returns the props object.

When we have a new state, the props in our component will change according to our new state.

Also, we need to dispatch our imported action creator.

With this one, we have access to our itemFetchData action creator through our props object. This way, we can call our action creator by doing this.props.fetchData(url);

Finally, we will call this action creator in the componentDidMount lifecycle method:

Side note: if you are wondering why are we calling the action creator in componentDidMount instead of other lifecycle methods, I have found a couple of good reasons here:

You can’t guarantee the AJAX request won’t resolve before the component mounts. If it did, that would mean that you’d be trying to setState on an unmounted component, which not only won’t work, but React will yell at you for. Doing AJAX in componentDidMount will guarantee that there’s a component to update.

Fiber, the next implementation of React’s reconciliation algorithm, will have the ability to start and stop rendering as needed for performance benefits. One of the trade-offs of this is that componentWillMount, the other lifecycle event where it might make sense to make an AJAX request, will be “non-deterministic”. What this means is that React may start calling componentWillMount at various times whenever it feels like it needs to. This would obviously be a bad formula for AJAX requests.

Besides this, we need some validations:

And the actual iteration over our fetched data array:

In the end, our component will look like this:

And that was all ! 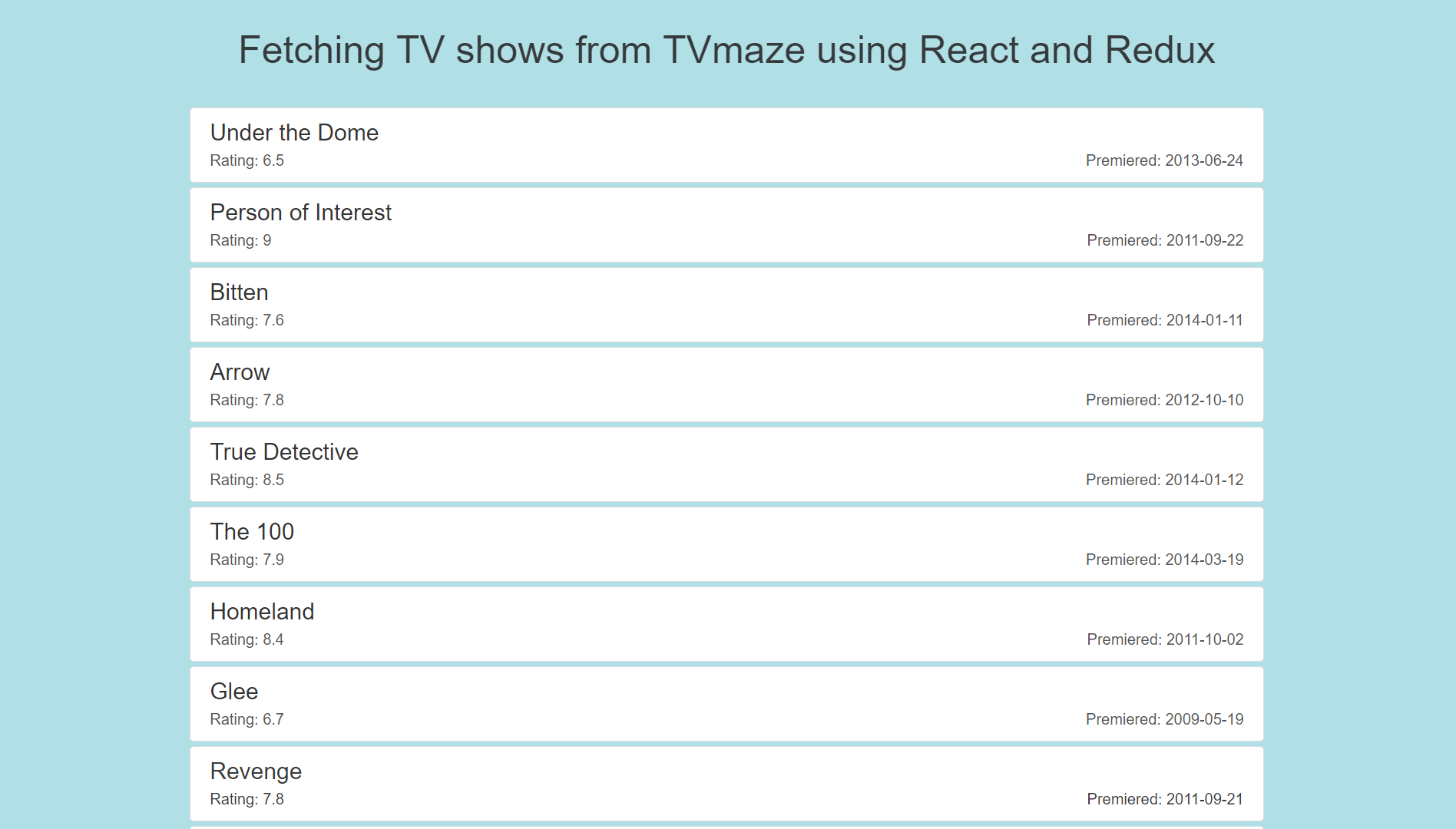 Last words and other resources

We now have an app that is fetching data asynchronously from an API, using React for our UI and Redux for managing the state of our application. I think this is a good starting point for a personal / small project and also you get to work with new technologies.

This doesn’t mean that Redux is the solution for every problem we face when writing apps in React or that Redux is a a must-use in any Javascript written project, as Dan Abramov states in an interesting article.

Also worth noting, Facebook are preparing React Fiber, a reimplementation of React. They state that its goal is to make it more suitable for animations and gestures and that the key new feature will be incremental rendering which is:

Other interesting technologies (which I’m currently looking into) would be Relay and GraphQL. Maybe I’ll also write something about those. Stay tuned :)