This article shows you how to use the Microsoft Azure Service Bus to relay requests to an on-premise API through the internet in a secure manner.

You will need a Microsoft Azure account. Create a new “Service Bus Namespace” (in this example it is “HaufeMessageBroker”). Under the “Configure” tab, add a new shared access policy, e.g. “OnPremiseRelay”: 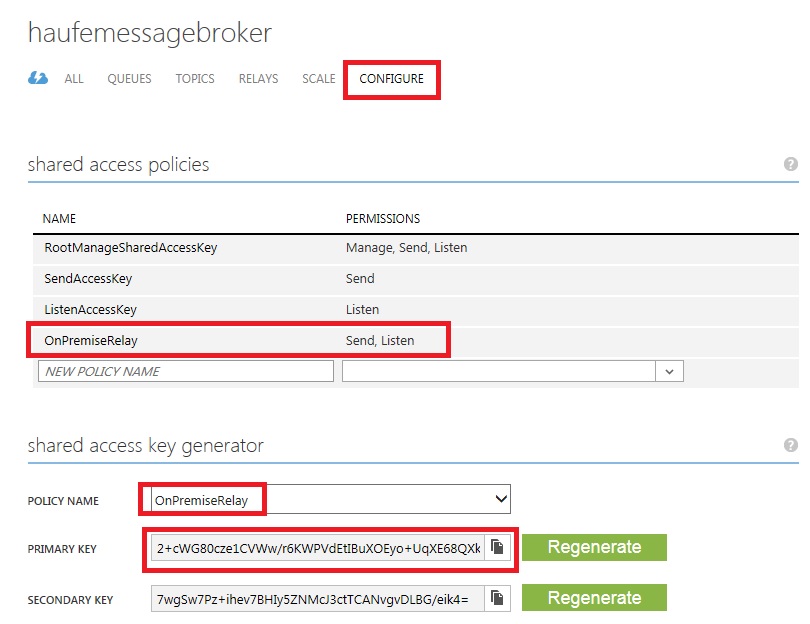 Use the namespace, the policy name, and the primary key in the code samples below.

We make some assumptions about the on-premise API. These are not prerequisites in the sense that otherwise no access would be possible, but they should apply to many standard situations. It should also be fairly clear which aspects of the solution would have to be adapted to other situations.

One easy way to create an on-premise API is using the self-host capabilities of ASP.NET with Owin. There are many how-tos available for doing this. However, this solution does not dictate how the on-premise API is to be implemented, and any one will do.

The Azure Service Bus provides an easy way to access an on-premise WCF (Windows Communications Foundation) interface from any cloud server. Of course, we do not want to rewrite our entire business API to become a WCF Interface, so part of the solution is to develop a small and generic WCF Interface, which resides in a new on-premise service and simply relays HTTP request/response information to and from the actual on-premise API. This is the “On-Premise Relay Service” below.

We also need two ASP.NET applications running in the cloud:

So there are actually two relays at work, neither of which has any business intelligence, but simply route the http requests and responses:

In addition, there is the Azure Service Bus itself, through which the “Cloud Relay Service” and the “On-Premise Relay Service” communicate with each other.

Here we see a local client logging in to the on-premise API, thereby receiving a session-id, and using this session-id in a subsequent call to the API to get a list of the user’s contacts. 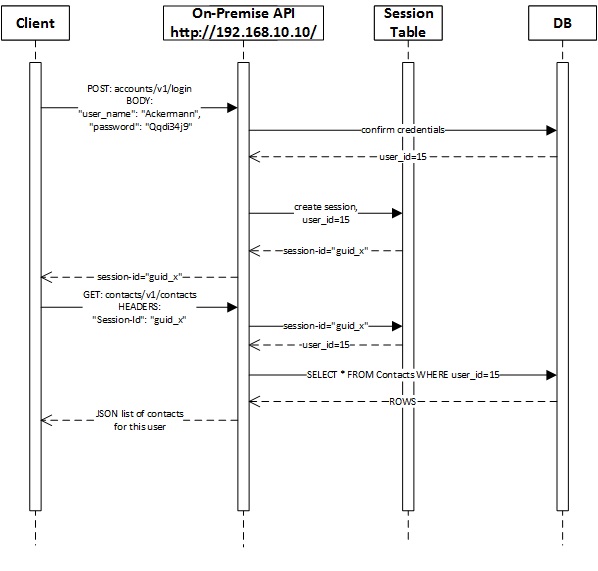 This shows registration with the Identity Portal in two steps: 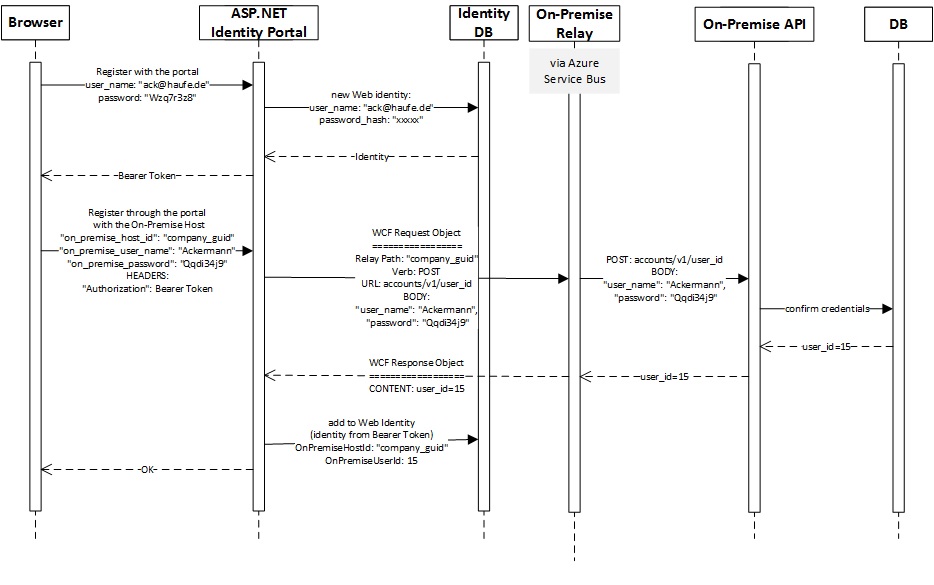 After this process, the identity database contains additional information linking the web identity to a specific on-premise API (the “OnPremiseHostId”) and to a specific on-premise identity (the “OnPremiseUserId”). From now on, whenever a client logs in to the ASP.NET Cloud Relay with his/her web credentials, this information will be added to the bearer token in the form of claims.

Now the client activity shown in the first sequence diagram looks like this: 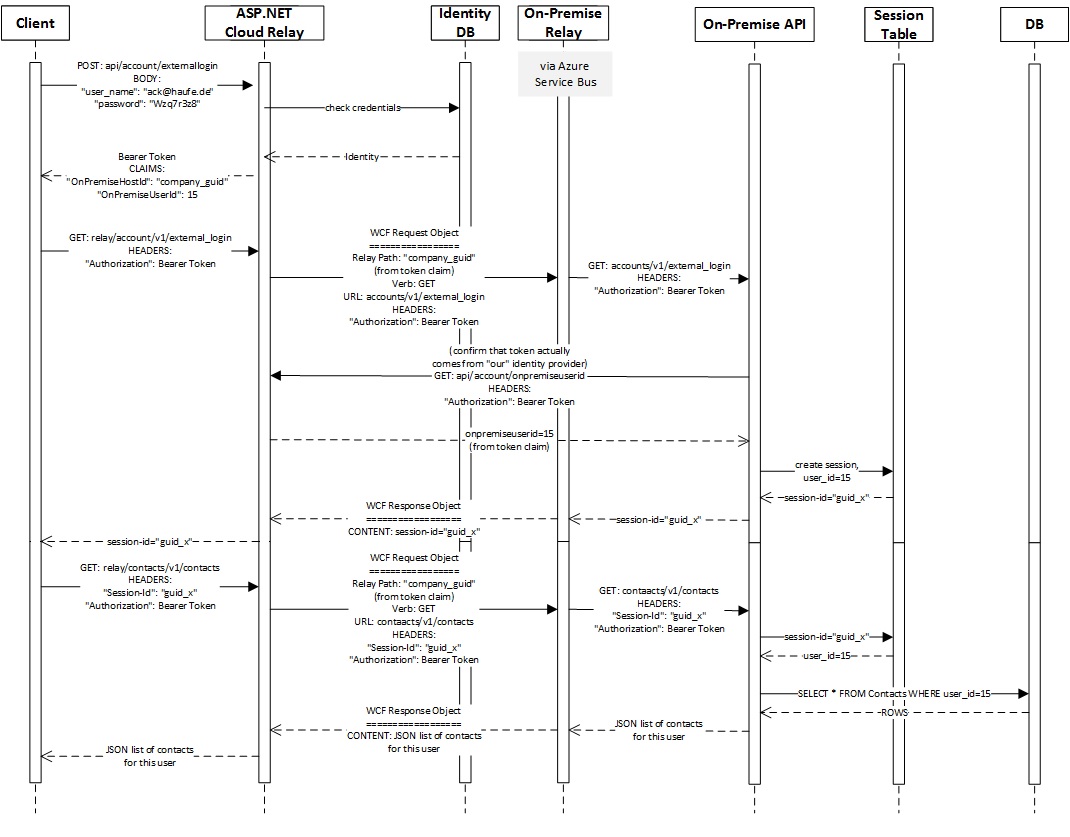 What has changed for the client?

What has changed for the on-premise API?

The following sections show the actual code necessary to implement the above processes. Skip all of this if it’s not interesting for you, but it is documented here to make the job easier for anyone actually wanting to implement such a relay.

New Methods in the On-Premise API

Here are the new methods in the accounts controller of the on-premise API which are necessary to work with the external relay.

And the implementation in Relay.cs

And finally, the code while starting the service to connect to the Azure Service Bus under a unique path.

This code could be in program.cs of a console application (as shown) or in the start-method of a true service):

Once the on-premise relay service is running, you will see it listed with its host id in the Azure Management Portal under the “Relays” tab:

Create a new ASP.NET Project (named e.g. “IdentityPortal”) and select “MVC”. Before compiling and running the first time, change the class ApplicationUser (in IdentityModels.cs) as follows:

This adds two fields to the user identity, which we will need later to link each user to a specific on-premise API and specific on-premise user id. And, importantly, it adds the content of the two new fields as custom claims to the ApplicationUser instance.

By adding this code before running for the first time, the fields will automatically be added to the database table. Otherwise, we would need to add them as code-first migration step. So this just saves a bit of trouble.

Now compile and run, and you should immediately be able to register a new web identity and log in with that identity.

Prepare to register with the on-premise API

Use NuGet to add “WindowsAzure.ServiceBus” to the project.

Also, add a reference to the OnPremiseRelay DLL, so that the IRelay WCF Interface, as well as the Request and Response classes, are known.

In AccountViewModels.cs, add these classes:

In _Layout.cshtml, add this line to the navbar:

Add the following methods to the AccountController class:

Now you can log in to the Identity Portal and select “Register With Host”.

Then fill in the form appropriately: 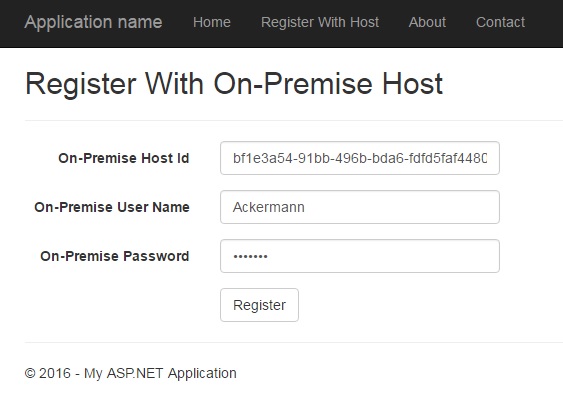 Once this registration is successful, any client can now communicate with the on-premise API using the Cloud Relay Service, defined below.

Add the following method to the AccountController (for this, you must include the System.Linq namespace):

Use NuGet to add “WindowsAzure.ServiceBus” to the project.

Also, add a reference to the OnPremiseRelay DLL, so that the IRelay WCF Interface, as well as the Request and Response classes, are known.

Then add a new controller RelayController with this code:

The Cloud Relay WebApi should now be ready to return an authorization token for the web identity, and also relay http requests via WCF and the Azure Service Bus to the on-premise relay service.

Note that all relay methods are protected by the class’s Authorize attribute.

Get a token using a web identity (Note the path /Token, the content-type, and the content): 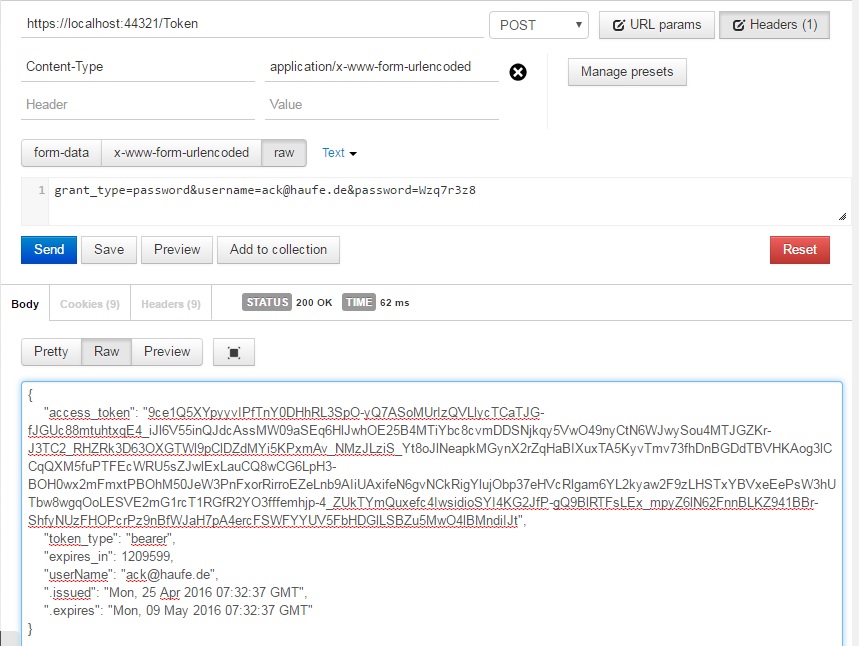 Using the token, with prefix “Bearer”, log in to the on-premise API and receive a session-id:

Now use the session-id to make normal calls to the API: