Today I’d like to introduce our first design article on our freshly updated Haufe Group Work Blog. My name is Claudius and I’m Chief Designer at Haufe Group. Let me give you a short introduction to how we see the term UX at our company.

There is a great quote from the two experts Dr. Jakob Nielson and Dr. Don Norman - kind of UX gurus in this field, who said that

“User Experience encompasses all aspects of the end-user‘s interaction with the company, its services and its products. “

What a great quote, I believe in that!

To make this real, we all have to work together, work towards one goal, everyone acutally has to be a part of UX. Let me explain what that means.

When you would enter Google and search for the term UX, you’ll find some infographic similar to the following. I believe these explain quite well that UX is composed of three areas: Business, Technology and Design. Each of these disciplines has a great impact on UX. Let me iterate on this a bit further. 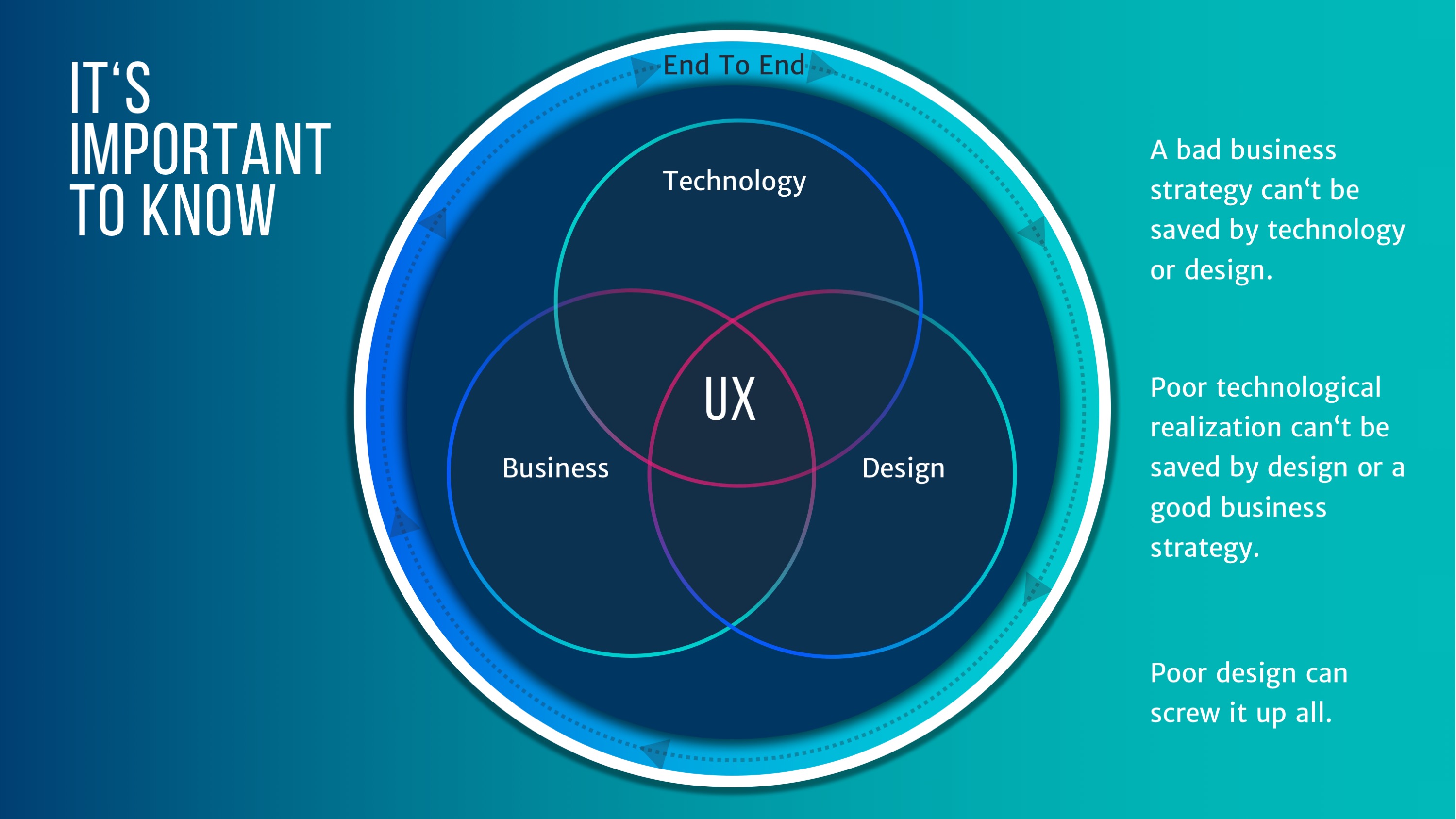 Very interesting are the overlapping areas, which show us how important a strong cooperation of these three areas is in reality. So Brand, for example, is not only a business issue, but it is created out of the cooperation between Business and Design units.

But that’s not enough: To create not only a single experience but a unforgettable and coherent brand experience we have to consider all touchpoints for the customers - no matter if it is print, digital or something else, its respective context in time & space and the user’s emotions.

What is an example for a good UX mixture?

There are a lot of good UX examples, first of all Apple (just think of the groundbreaking impact of the iPhone in the industry and our lives), Google, Uber and many other brands that have changed our lives forever. To show you that not only we designers and information architects are UX experts but that UX is everywhere and anytime, I want to focus on a different example with good UX results.

Now you may ask: Why is this a good example for UX? Let me explain: According to the Rolling Stone magazine in 2013 this record is the most important record in the World! From 1967 until 1971 it was the most selling album of the World. To this day it is ranked 59 of the World.

The success of this record is the sum of a lot of details and aspects we can directly connect to what we talk about and work on today as UX experts. Actually the Beatles didn‘t know – but they created a kind of a Design-Thinking Process. 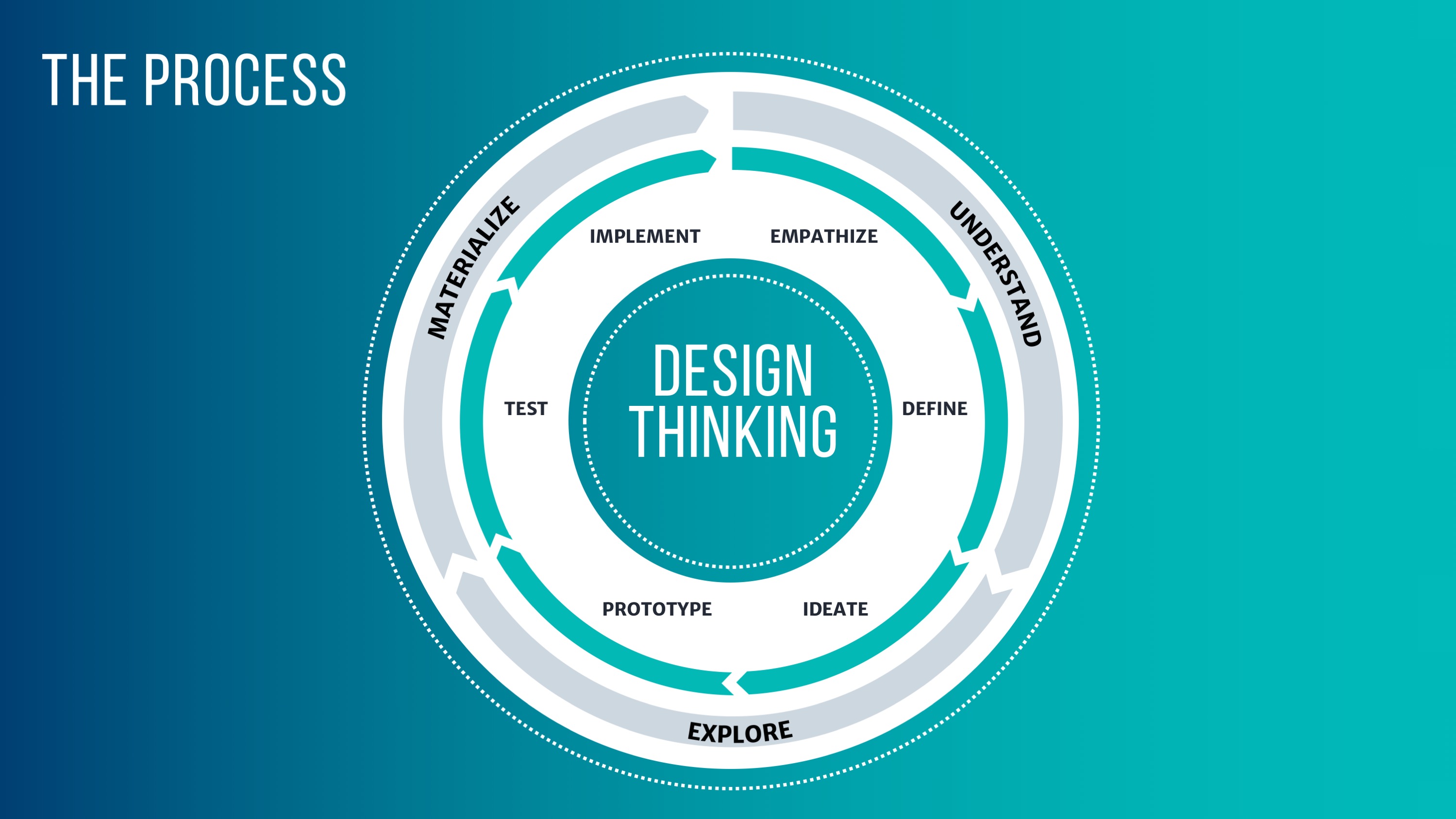 The creation of this record was a journey in itself. Before this record was released, the Beatles decided to never go back on stage. They went on holiday! One went to India to learn how to play the sitar, one went to Italy and Paul and John had time to speak and hear other musicians, what we now call Benchmarking, and listened to customer feedback (User research). We call this Needfinding as a part of User Centered Design. When they finished their holidays, they all came back together and talked about their experiences (Notice: Thinking products as a journey and experience). They realized they found something special and something new was in the air!

A famous quote form Paul McCartney is that “The Beatles wanted to be the leaders of the Generation”. This not only influenced the music and sound they created but also had a wide bigger impact on everyone by spreading the message of peace and love during times of war and conflict.

But let us embark on some details that fit perfectly to our UX environment nowadays.

it has a product vision

After doing the holiday research - the Beatles started to set up their product vision:

it has user testing

They carried out what we today call User Testing as they provided small radio stations with unpublished songs, to get an objective feedback. And the positive feedback was so strong, that they even felt urged to publish their record before the planned release.

But it is not just these basic points of UX, it is whole experience that’s counts with the St Pepper album. Let me show you examples, what the Beatles did during their process, what was not common. 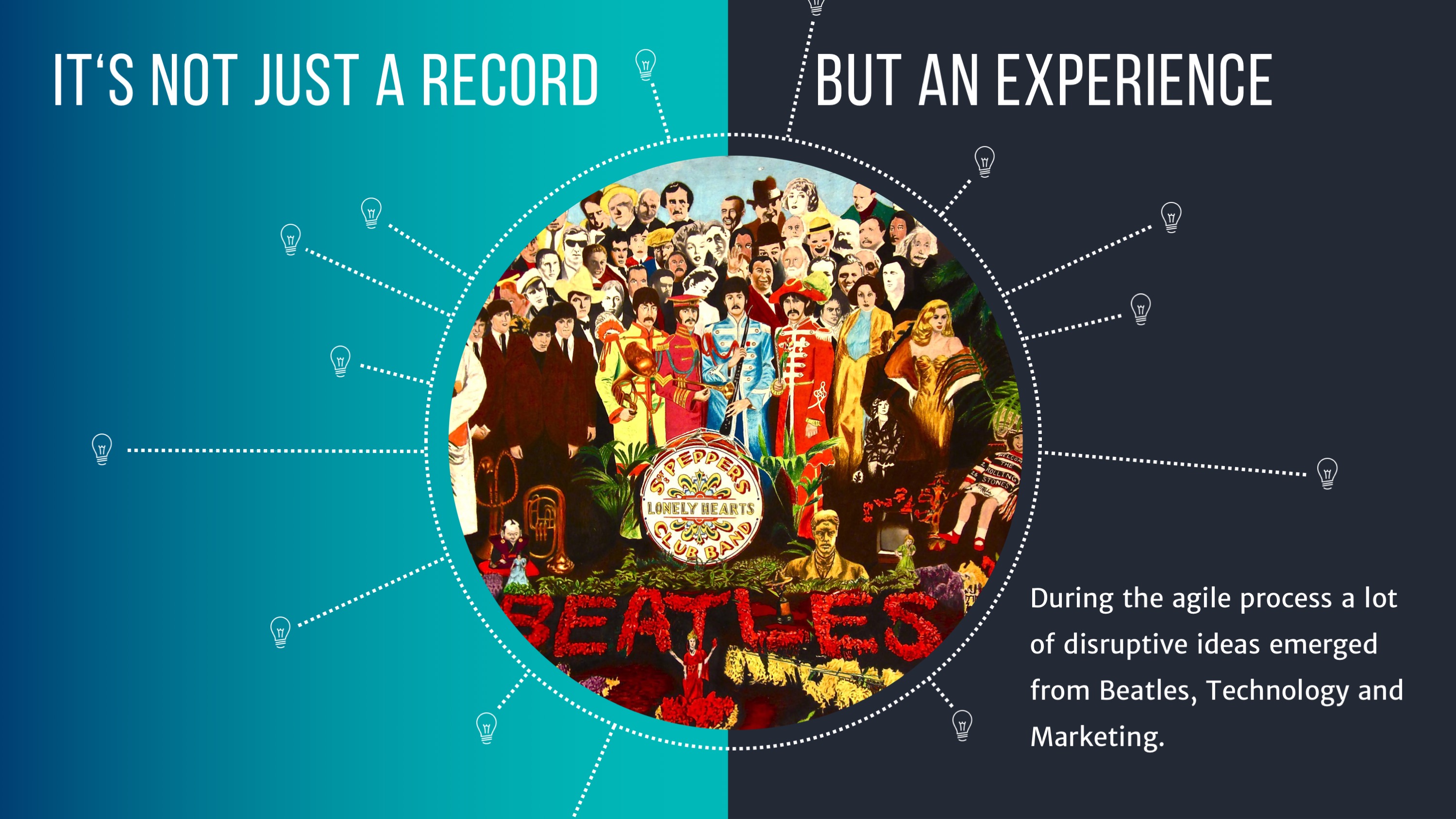 The Bealtes thought about the image on the cover. Before, no musician was really interested in that. But they thought that it was as important for marketing. So they chose an artist to turn the cover into an artwork itself. That was new NEW!

The dress code for the Beatles before selling Sgt Pepper was a jacket and a tie, very well dressed! Now you can see that they created a new look. Full of colour and happiness. This was something NEW!

Additionally the Beatles tried out new instruments and new technologies of mixing. For example they decided to use a complete orchestra. Well that sounds NEW!

They decided to make a double cover for their record, to create a haptic experience for the fans. Also NEW!

At the end, the Beatles wanted to tell a story, so they made the first concept-record in the world. NEW!

The lyrics were so important to the Beatles that they wanted every fan to be able to read them, so they print it on the cover. Nobody has done this before! (Before they sang about love me do, and she loves me not,… - now they sang about girls, who are leaving home, drugs and war)

For me the Beatles really put it in one sentence - they were UX.

UX is not working in small units alone. It’s about widing out. The example of the Beatles shows, what can happen, when experts of all departments working together on the same and believe in that.

A perfect product is a great one when the whole experience is extraordinary and evokes emotions like surprise and unexpected things.